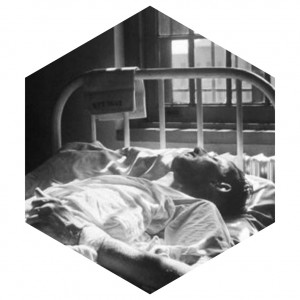 Six months into what my physicians called a persistent vegetative state, six months into what my mother had referred to as a coma back when she was allowed to visit me—when she would stroke my hand and say to me, “I know you’re in there somewhere, please, can you hear me?”—six months of my nervous system knitting itself back together according to the needs of the conspiracy, within a lattice of 3d-printed nerve guidance biopolymers and secondary internal scaffolds of fibronectin designed to facilitate remyelination—signals from the other victims began to echo in the hollows of my phalanges and metacarpals as though I were typing a transcript in real time while I sat healing and plotting my revenge against the men who killed me; though revenge might be superfluous as the lights are failing, the temperature is rising—it’s as though someone is spit-grilling a whole lamb just a foot from my hospital bed—and my life is flashing (present tense) before my eyes, to wit: age four, stomping around in my mother’s old boots, playing with her dog tags, and my neighbor Azad with whom my family shared a common yard stares at me and frowns and quickly he jerks his head away when I look up and make eye contact; the crushing weight of my rolling partner in jujitsu class, all hundred-eighty pounds of him seemingly on my chest, ninety pounds per lung—I think How am I to learn how to sweep him if he won’t even let me move and I tap out, embarrassed, because he doesn’t even have to slap on a submission to make me quit that day; flat, warm Coke on a summer day that makes me just want another mouthful of Coke, but I settle for huge gulps of water and ice to chew on and honestly it is just as good, but later when the sun sets I find that I can taste the soda pop—the citrus oil, the cinnamon, vanilla, coca essence—on my tongue and want another swallow and this time from a cold aluminum can… but none of these are my memories, they belong to the others, it is only this one I am sure about: my first real firefight, in Ukraine, against real live Nazis who are almost comical in their commitment to the recitation of their nation’s glorious racial history, from the Scythians through the Ostrogoths and unto the embrace of Byzantium—but with only shrugs and muttering for the Huns and Khazars and a raised firearm when I shouted that of course Slavs weren’t Aryans—but for all their pretensions toward being a “Master Race” they bleed out the holes I put into them just as swiftly as any Kurd, Iraqi, or Colombian; the message flashing inside my contact lens informing me that I was back on active duty and had to “take out the trash”—I am sufficiently indoctrinated to obey (and addicted to adrenaline) that I rush to complete the job, and only when I am already on the roof across the street from the seventh-story office of my target does the real message (something is happening) my superiors sent to me come in through my sinus implant, which ironically triggers the detonation that tears me to shreds—the weird thing is that I think more about and more deeply about my circumstances in that last “flash” than I have in the prior five months and three weeks, which suggests to me that whatever is coming is something very profound indeed; my error was in centering myself in the narrative: Why was I targeted? (or is the question “Why have I survived?”); is it ironic or simply apropos that when a sniper looks through the cross-hairs at xir target that xir own eye—I still remember my eye boiling away in its socket—is similarly framed by the crosshairs, making the sniper a target xirself (neither, just dumb luck); is it just a peculiar and heretofore unreported side effect of my treatment that my new nervous system had “superseded” my old exteroceptive capabilities, i.e., sight, hearing, etc., with a new form of proprioception, i.e., the experience of SHF and UHF radio frequencies—Wi-Fi—as a continuous hypnopompic dream state of motion, joint and limb position, and sense of location in space; or is this new realm of perception part of the plan to manipulate and destroy me (fucked if I know!) or am I again simply hoping that what had happened to me, to all of us, wasn’t random?—since the impulse to find—no, to construct—meaning in our lives truly is a fundamental property of having a human-sized brain, and my brain is the only part of me that continues to function norm… well, “normally” is too strong a word, as my brain has also been damaged, and without ordinary sensory input my cogitations have taken a turn for the extreme—those memories I related to you are not all my own, by which I mean the body I am in did not experience them until I received them from the other assassins—who had all been sent to assassinate other assassins just as I had been sent to assassinate an assassin—who are present with(in) me in what we call the æther (something is happening); you could say that I think in bullet points, though given the state of me I’d forgive you for making the joke that I think only in “shrapnel points” and by you I mean only myself, but I do not forgive myself; there is no longer a forgiving bone in my body; there are atrophied muscles, ruined bones, the polyethylene glycol nerve guidance conduits that keep me twitching and flapping, and all the shrapnel the teams of surgeons were too exhausted to remove—these are my shrapnel points:

—the person I was sent to assassinate—

—through either accident or design—

—the world is a dangerous place, a dynamic agglomeration of risk factors—

—on any given day—

—several publicly available variations of the secret recipe for Coca-Cola—

—I am an American girl—

—at least half a dozen of us, all killers who found themselves tasked with killing one another instead of our usual prey of: industrialists, tin-pot dictators, especially annoying Congresspeople, teen celebrities

—now we are all in separate hospitals, on different continents, being treated for severe nerve damage with synthetic 3D-printed nerve guidance conduits—

—it’s amazing we’re not all dead already (all: the 7.6 billion of you, not the half dozen of us)—

—I was never briefed on my assignments, never debriefed afterward; it wasn’t as though I was incurious or even necessarily all that discreet; if I am being honest I didn’t want to know because I couldn’t deal with the possibility of what could go wrong if I ever failed and let the wrong man or woman live for even a moment longer than my superiors wished—

—activity along the Ramapo Fault—

—when I was a young child, there were significant, if vague, regulations regarding the production of commercial television programs for children; educators, psychologists, and ideologues prepared pro-social messages (e.g., “violence never solves anything”) for my consumption—

—codename “Gavrilo Princip,” that infamous slayer of Archduke Franz Ferdinand of Austria and his wife, Sophie, Duchess of Hohenberg; not only was he the man who birthed the modern world through the barrel of a gun, the educational standards of the modern world are sufficiently low that I didn’t understand my own codename until I looked it up, here, now, in my hospital bed, as my artificial nervous system finds the hospital’s Wi-Fi network and logs us in—

—it occurs to me now that perhaps my mother stopped visiting because she is dead, which in turn suggests to me that she is dead because she was assassinated in order to keep some cascade event from occurring and leading to the final collapse of civilization (or is “final” just another egocentric twitch; how many times has civilization “finally” ended already—at least one too few is the rejoinder that hops immediately from mind to mind)—

—these thoughts are my own, but their origin is not of this body, or to be more precise not wholly of this body; there are other bodies out there in the ætheric Wi-Fi, bodies in states very similar to my own, experiencing side effects identical to my own, and among those bodies are people very much like myself, people who:

(something is happening NOW)

… we now realize and embrace the fact that our seeming failures and the concomitant collapse of the international political order, widespread failures of first-gen nuclear plants and other energy infrastructure, and macroeconomic chaos over these past six months are, in fact, not the failure of the plan but instead of mere epiphenomena of the plan: us, together, in far-flung hospital beds, slowly having our nervous systems knitted together, giving us time to master our new senses and channel of communication, to wit: we are a very tiny Internet, but we are growing every day—the world will be ours, and we shall save you from (y)ourselves.