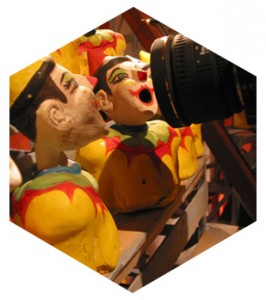 “This is the reason for this journey into hyper-reality, in search of instances where the American imagination demands the real thing and, to attain it, must fabricate the absolute fake: where the boundaries between game and illusion are blurred…”

Are we witnessing the spectacle of politics or the politics of the spectacle? It is impossible to tell the two apart. Guy Debord spoke of the Spectacle as being the ever self-replicating capitalist structure; a society saturated with images, stimulating distractions, and the limitless commodification of existence. The authentic ceases to be, and only the flood of immersive media remains. Umberto Eco once dubbed it the ‘authentic fake’. There are few better examples of this than American politics.

It has been said in humor that the primaries is the best of reality television. That statement could not be any more accurate. Politics, as with everything else, has been devoured into the Spectacle. It is the ultimate fake, the parody that reflects the people, and the satire that reveals to us the truth about our own culture. We mock politicians as if we are looking into a funhouse mirror, but alas, that is no funhouse mirror, it is simply our reflection.

“As democracy is perfected, the office of president represents, more and more closely, the inner soul of the people. On some great and glorious day the plain folks of the land will reach their heart’s desire at last and the White House will be adorned by a downright moron.”

Whether the one in question is a moron or not can be argued, and will be, day after day ad nauseum. Mencken does nail the essence of it. As much as we hate and mock political leaders, we might as well be mocking and hating ourselves just as much, if not moreso. The people, the media, the political leaders, the political show: it is pure self-replicating Spectacle.

If the end of history has been reached, God is dead, Spectacle has replaced culture, and citizens are manufactured substitutes lacking authentic Being; then currently it is mere self-replication unto extinction. This may sound grandiose and melodramatic. Perhaps it is. Yet this brings us to the perfect example of the ‘authentic fake’, of the self-aware parody, the recent rabble rousing that is Donald Trump.

Years ago Trump threw himself in the spotlight with his typical arrogant statements, later he challenged the President, and now he returns for the third time in 2016. Originally he could be brushed off as a publicity stunt, but we must reconsider that in light of his recent ramblings. Members of the GOP have even come forth decrying Trump as damaging to the Republican Party, though is he really doing as much damage as they claim?

Trump campaigns on the slogan: “Let’s make America great again!” This comes across as satirical. Perhaps it is, perhaps it is not, or perhaps we are not used to seeing our reflection and finding it so outlandish that we must question the mirror. It has been dubbed Poe’s Law when one cannot tell the difference between satire and seriousness. One could as easily say this is the perfect description of American culture, political issues, the society of the Spectacle, and even our religiosity. Not only are the boundaries between “game and illusion” blurred, but the boundaries between satire and seriousness are blurred, if they still even exist.

As Umberto Eco states, American imagination craves the real thing, but unfortunately we have no idea what that means anymore, if we ever did. We only have a ‘real without origin or reality’, as Baudrillard remarked. Therefore we craft the authentic fake in our image; the fatalism of this being that the authentic fake has first crafted us in its image, and so the self-replication of the Spectacle continues.

It is asked endlessly: “What do the American people want?” Truthfully we do not know. One must have an awareness of oneself to know what one actually desires. As a collective whole, we lack this altogether. We have no heart, only passing whims and wants. Ideology ceases to exist, as does religion, and what continues is only the semblance of that. The right words are spoken and the rhetoric is well rehearsed, though it is completely hollow. The ideologies of America today, be they secular or religious, are merely echoes leftover from the past.

Again, another presidential election is approaching. Again, we will praise our chosen candidate and condemn the opposing candidate. It is banal to discuss the futility of this ritual. It is reality television, a manufactured substitute in place of the real, and we will be immersed in the excitement of seeing who will be voted off the island. The Spectacle is ever-replicating.

Plugged into this bestial structure, both tangible and intangible, we are ever stimulated by the stream of images and manufactured substitutes. If we work toward ending the world of the Spectacle, will there be a world after that, or is the Spectacle all that there is now? Perhaps we have only just begun to become immersed in the Spectacle and have yet to see the absolute pinnacle of the real without reality.