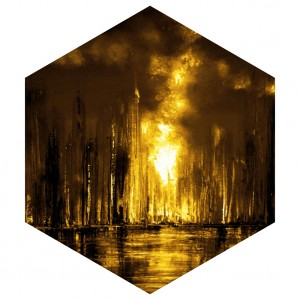 “This is the stuff everyone is talking about? The chem that kills?”

My skepticism was clear in the tone, despite Kira’s smirk. We walked down the rutty street, full of trash and scented with homeless scum. Kira squeezed my hand in reassurance and gave me sweet words:

“Nothing bad will happen. I promise. You’re strong enough.”

We continued down this forgotten street. Suddenly there were gasps and shrieks—in front of us a sparse crowd gathered around a corpse splattered against the cement.

Kira gave me a sad look. “Another one bit the dust. It’s becoming commonplace.”

A few ratty guys were laughing at the sight, nihilistic humor at its harshest; one finally remarked, “These fuckwads will never get it, will they?”

This confused me, as I was new to the city, and would have been rape-meat had Kira not come along. As we kept walking, leaving the scene behind us in apathy, she knew I was about to ask what the fuck that was about. She immediately went into a spiel, like a tourist guide in hell:

“That was a scribe. They cloister themselves up in that abandoned library we just passed. Determined to reach God through reason, they drive themselves to the brink when they realize reason means jack shit in the infinity of it all. Death by theoria is the trendy thing kids are calling it. They drown themselves in ego, and offing themselves is better than the dry existence they condemn themselves to.” She rambled this off as if it were nothing, another day in the neighborhood.

Approaching an alleyway we were stopped by an older, scarred-up man with a steroid physique. He brought out a penlight which had a black bulb and glanced it over Kira’s extended wrist, her veins glowing under the beam. He gave a nod; we kept walking. I was too nervous to speak. Around us were people slumped over in drug-induced comas. Kira grabbed my hand and pulled me into a small storage room. Graffiti and chems decorated the room, and a petite girl handed Kira a vial of neon purple. The petite girl looked no older than fourteen, and winked at us in such a seductive manner as she strolled out. There was a ragged sofa that Kira insisted I get comfortable with. She used a clean syringe to pull out the neon purple; the color was mesmerizing.

“This is really freaking me out. What if it kills me? This shit is serious,” I finally said, and  confessed my fear.

In the sweetest voice, Kira whispered, as she massaged my wrist to find the vein, “You’re going to see God. I promise. God is in the flesh, in your blood, in this syringe, in your brain. The flesh is divine. And if you aren’t strong enough, the husks we saw coming in is the fate. Seeing God burned the soul out of their body, annihilated the soul. It’s worth the risk.”

Before I had the chance to resist, denying this horrific drug that could kill me, realizing this was a serious mistake, she smiled and injected it quickly into my wrist. There was no consent.

Immediately, it hit me. I drifted off and heard the soft words, “Sleep well, love.”

Floating in abysmal blackness, no physical sensation, thought ceased, verbalization impossible, perhaps I was dead. In an instant I was plunged into a million sensations, memories, emotions, thoughts… beautiful pastures, happy children, breastfeeding a baby, making love, peace, contentment, miraculous art and ceremony, pure and utter euphoria to the furthest extent imaginable. In an instant my mind was a billion minds, and my body was a billion bodies, in an ocean of bliss. The vastness cannot be detailed. It felt like centuries. If there is a Heaven, this was it. If there is a Samadhi, this was it. Think of the happiest and most joyful you’ve ever felt in your life and multiply it by a thousand…

And in a distorted crooked curve, a jolt to the nerves, this infinite ocean of experiences became limitless painful hell. The billion minds, sensations, memories, thoughts were filled with the most wicked acts in existence. The march of soldiers and the sadistic joy of inflicting pain on prisoners; the red flood of genocides, the agonizing starvation of a dying child, the disease that spread through lesser nations; I was both the epidemic and the flesh, both the sadist and the victim. Not a minute sensation passed without feeling it to the utmost. Fertile pastures become barren stench, rivers and soil become polluted, the poor waded through trash heaps. Exploitation is the law of nature, and no others exploit more cruelly than humans do other humans, than humans do other animals.

Throughout I laughed the laughter of victory, of success and gain, while simultaneously embodying the depths of despair and resentment. This was a torture that deformed the soul, for I became the tortured and the torturer. I screamed in pain, begging for it to stop, while simultaneously laughing and thoroughly enjoying the sadism. Genocide, war, violence, rape, famine, torture, illnesses, plagues psychosis, slavery… my being was this, an infinite stream of total suffering.

It could have been days or months. I awoke to the sound of Kira singing to herself. Noticing I had awoken she playfully pranced over, kissing me softly on the lips and giving me a coy smile: