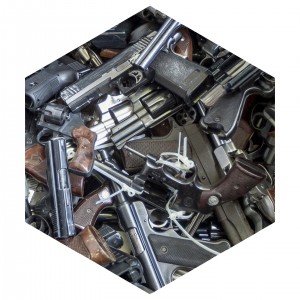 The lady stumbled through the door of the dojo, a blur of blonde hair and blue sundress, pushing her little boy with one hand and holding a phone to her ear with the other. As the boy began training, she spotted an acquaintance at the far end of the viewing area and immediately launched an ear-splitting “Hey, Gggiiiirrrrllll,” designed either in a din of self-absorption or of a pathological need to be seen—some people love surveillance as much as it loves them. And apparently it loves them a lot.

The Atlanta Police Department recently unveiled Operation Shield, a coordinated program of more than 5,000 public and private security cameras and license plate readers that are monitored through cutting edge analytics and smart software at the Laudermilk Video Integration Center. Operation Shield is “among the most robust and sophisticated surveillance systems in the world,” serving as a strong deterrent to crime in Buckhead, the most secure neighborhood in Atlanta, with over 70% of homes existing behind security fences, and having the highest white to minority ratio of any incorporated neighborhood in the State of Georgia. The program also maintains a budget for rewarding anonymous tips that lead to the arrest and indictment of criminals.

Within seconds, the acquaintance and everyone else in the room was made privy to her exciting news: that her husband was still in the car closing a $1.5 million real estate deal, and that in so doing had caused their late arrival. “Imagine that,” she said, “Jacob has been taking karate for 3 months, and today, on our first time seeing what actually goes on here, we miss the beginning of class. We are just so busy this summer, what with the kids also in ballet and soccer …”

With everyone duly impressed, the blonde settled into a vulgarly loud and enthusiastic conversation with the acquaintance, and for 30 minutes we thrilled at her insider knowledge of the Sara Smith Middle School bureaucracy, the best place to buy “appropriate lunch boxes for a kindergartener” (Hannah Anderson, over at Phipps’s Plaza has good ones), and the current must-see movies and TV shows – the ones that all the students would enter the upcoming school year talking about.

Meanwhile little Jacob lined up next to my boy. Even if his parents weren’t watching his lesson, I certainly was. Unsurprisingly he made an impression that confirmed and justified his parents’ disinterest. If they were willing to pay for lessons so as to add “karate” to the list of little Jacob’s achievements, then he was willing to stare at the ceiling for 30 minutes and perform the desired movements and postures as flaccidly and disrespectfully as possible.

As the son jelly-armed a few jabs, the proud striving husband came inside all flushed from his triumph. The blonde was overjoyed and made sure to let us all know that if we wanted to buy or sell a house then her husband was also “[our] man.” He was justifiably proud and she was beaming. And why wouldn’t they be? They were happily living the dream, a model of life at the end of history; and neither was aware of what a pathetic masquerade their son was performing just a few feet away.

From the perspective of those of us who are less timely, those of us incompatible even with the margins of the blonde’s living dream, she and her striving husband appear to be a different species: those who are frightened by Five Nights at Freddy’s but undaunted by a life of wage slavery …

Thank you, Dad, for helping me justify my servitude by teaching me that heroes are those who pay bills on time and that courage is keeping my nose to the grindstone until my superiors recognize my ability to increase their profits!

… Those for whom the new Braves stadium is being built, opining that Major League Baseball should recruit low wage service workers from Chic-fil-A. “Even the blacks and Mexicans at Chic-fil-A are so polite, ‘yes sir, yes ma’am.’ When we go to McDonalds or even Kroger and I see the people they have working there, I just fear for America’s future …”

Dad, I always remembered your advice that, by keeping a high credit rating and staying out of trouble, I could be anything I wanted. And now that I have a son of my own, I am so gratified by his obedience and willingness to be led to a slaughterhouse, and I hear your words echo through the years: only those who disobey have anything to fear!

… Those for whom violence and danger are anathema to life, to be encountered viscerally or in a once in a lifetime coincidence with a lone gunman or terrorist bomber.

Officials at the Coca-Cola Co. in Atlanta, Georgia were horrified to learn that their iconic bottle was chosen as the most functional, and anecdotally the most meaningful, form of Molotov cocktail conveyance in the world. From the long sumptuous neck, which offers a safe barrier, or stopper, between the ignited fuse – of which flannel rags soaked in high octane gasoline were deemed the most effective – and the hand of the assailant, to the easily and tenderly handled waste line which was said to aid the distance and accuracy of throws, and finally the hippy “envy of Shakira” basin, perfect for holding an adequate amount of fuel to ignite a police cruiser, “the bottle,” as one masked respondent suggested, “is just made to be an explosive, to break, spraying fuel into a high arc, with vapor and fuel droplets ignited by the flames, producing a rainbow fireball and then a burning fire, consuming not only the remainder of the fuel but whatever it ignites. It’s one of the most beautiful things I’ve ever seen”

In a Coca-Cola Co. memo on the disturbing poll results, Thomas Murphy, a Vice President of Marketing, suggested that the company may consider changing the bottle’s “sexy waste line” to a form more representative of the portly and less aerodynamic shapes of many Coca-Cola drinkers’ midsections. “We are prepared to do whatever it takes to keep Coca-Cola from being associated with violence against the heroic efforts of law enforcement. We are horrified by the thought that Coca-Cola, through its commitment to maintaining the traditional form of its bottle – which has made it one of the most effective marketing tools of all time – has enabled sociopaths to use a destructive power far beyond the monetary output it takes to create a six-pack of petrol bombs.”

Later that day I left my gated community in this bastion of bourgeois affluence, and as I waited for the gate to fully open I imagined the blonde adding the tempo of gate-opening to her own manic pursuits – ten seconds is enough to rupture the fabric of this life, after all. It didn’t fully register how similarly she and I live until a few minutes later, as I climbed back into my Jeep with a fresh hot pizza in hand while being serenaded by a large group of Mexicans having a communal dinner behind the wretched apartments they call home. It wasn’t that I am white in comparison, but that I am bourgeois.